This week is brought to you by the Triangle Shirtwaist Factory. This holiday season, treat that special someone in your life to a hand-stitched American garment. Great in the cold, but also guaranteed to hold up in the heat. Use promocode “Deadbolt” for 15% off.

Welcome to the world this week, where…

The old man stood at the front of his porch.

The ember in his pipe lit up his face, showing a full gray beard and eyes that had seen the world. He stared out across the front yard, at the grass that abruptly met the pine forest, bisected by the dirt driveway. It was a dark, starry night, and relished in the supreme quiet all around him.

Just then, his old dog, Trigger, started to let him know something was approaching. He watched as the black at the end of the driveway slowly filled with light. He took one last puff from his pipe before putting it out. It was time.

He leaned into the house and said, “Sadie, darling, they’re here.”

There was no avoiding it.

They were upon him.

The Grandkids had arrived.

After World War 1, a large number of Australian veterans were given land in Western Australia to farm. When the Great Depression hit, they were told to decrease their wheat crop to bring the price up and receive subsidies from the government (which were never really given). This recently cleared land was the perfect habitat for Emu’s (think Ostrich) who were migrating back to the region for the season, and they began to more or less invade this farming territory.

In response, the government declared war on the Emu, arming soldiers with Lewis guns to eradicate the problem.

20 days into the conflict, the Royal Australian Artillery reported a staggeringly low number of confirmed killed Emus, while the Australian soldiers suffered no casualties at the hands of the birds. The commanding officer noted, “If we had a military division with the bullet-carrying capacity of these birds it would face any army in the world… They can face machine guns with the invulnerability of tanks. They are like Zulus whom even dum-dum bullets could not stop.”

On December 10, 1932, the Australian government formally called off their War on the Emu, having been unable to adequately subdue the Emu population. Effectively, the Emu’s defeated the Australian army and are the only species on planet Earth that are undefeated in formal military conflict with humans. Long live the Emu.

A Referendum on Nutritional Yeast

About a year ago, I was introduced to the bizarre and confusing condiment that is Nutritional Yeast. Often used as a cheese substitute for those with dietary limitations, it has a taste unto itself. I am not here to speak on the taste, which isn’t a good one. Nay, I am here to discuss the name of this foul food. Never have I ever seen something named so poorly. At some point in time, there were people sitting in an office discussing what to name this product. And they landed on Nutritional Yeast. That is without a doubt the worst marketing in the history of the written word. The use of the word yeast here is as despicable as anything I have ever witnessed. If someone were to ask me to name a topping or ingredient that would make me want to actually eat it, “Nutritional Yeast” is just about the last possible thing I would ever think is a good idea. They might as well have named it “Inactivated Saccharomyces Cerevisiae with Glutamic Acid”, which si what it is. It’s that unappetizing. End.

One from the road

In July of this year, I got my Wilderness First Responder certification from NOLS. This is an 80-hour course and is a pre-requisite for most advanced wilderness guide jobs. The class was taught at the Colorado State University campus Fort Collins, CO, 2 hours away from where I lived. I managed to talk the place I was working, who was also paying for me to take the class, to let me borrow a Chevy Tahoe for the 2 weeks to get back and forth. They assumed this meant to drive back and forth from my house to class and back, but after 2 days of that, I decided to live out of the car.

I spent the first night in the parking lot of the Devil’s Backbone hiking area, and woke up that morning happier than a pig in shit. I took a “shower” at 7 AM by pouring a Nalgene bottle over my head while the parking lot filled up with folks trying to get in an hour of mountain biking before work. Everyone kept their distance. I tried heading back to the same place the next night, but was woken up at 1 AM by a police officer knocking on the window of the van. After I talked my way out of a trespassing ticket by explaining that I was taking a WFR course and just trying to catch some sleep before class, he gave me a field sobriety test…in the middle of a dirt parking lot…which I technically failed. He said he didn’t want me on the roads under suspicion of marijuana and told me to be gone by 7 AM, which I agreed to. The reality here was there is absolutely no reason he should have been in that parking lot at 1 am unless he wanted to take a nap on the job and I was just in his spot. But I digress. 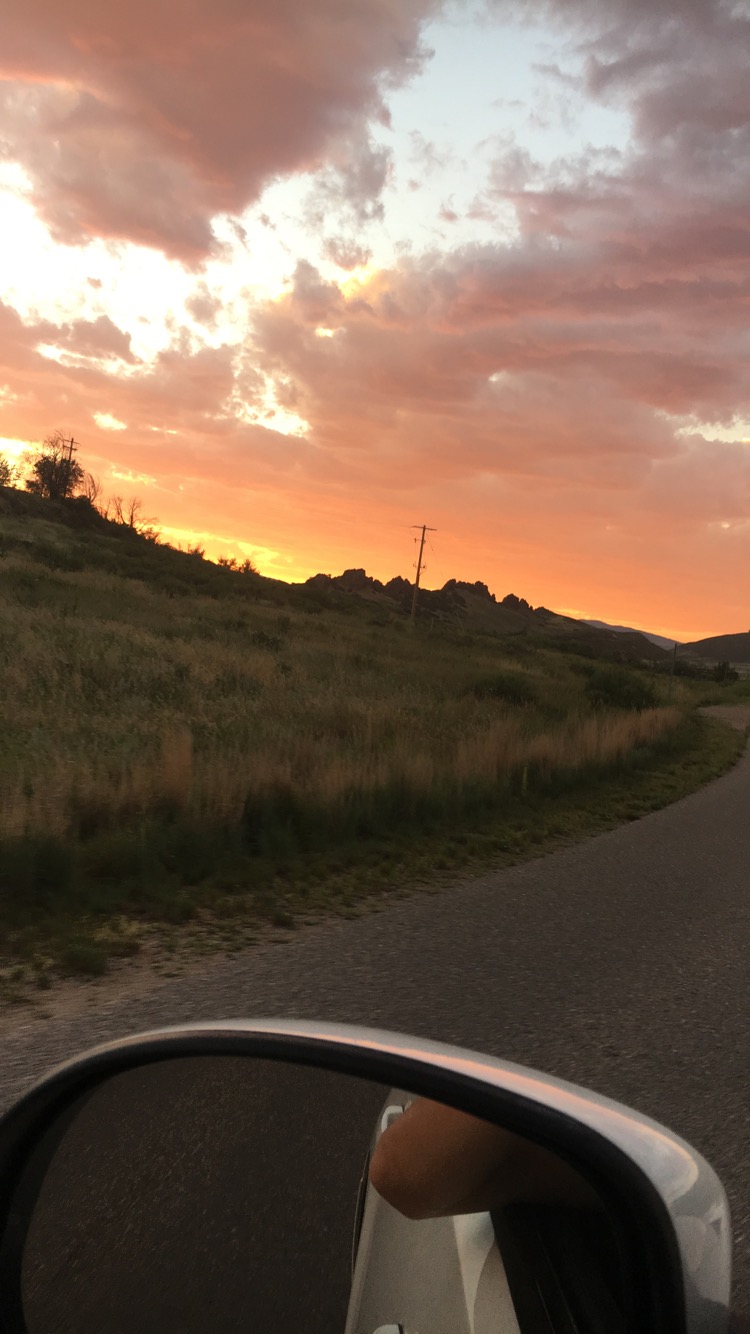 The road into the Devil’s Backbone parking lot.

I showed up to class the next day a tad tired and told the people around me about what happened. I was met with a understanding nods and a few “Fuck, man. That blows.” What needs to be understood about these classes is that it is usually a specific kind of person who needs to be licensed as a medical first responder in wilderness settings. The class was full of climbing guides, rafting guides, hiking guides, wildlands firefighters, avalanche doctors, and other assorted dirtbags and pirates. I had a deep respect for everyone around me.

One of the older guys in my class overheard me talking about getting hassled and told me that he had a friend who was pretty well off and had a big house, which sat on an even bigger piece of land not too far from Fort Collins. He was pretty sure that if I went over to the guys house with him after class that day and showed him I wasn’t a lunatic, the guy would have no problem with me parking my borrowed Tahoe out in the field. After class that day I went over to his house, past the Make America Great Again sign and shook his hand, intimating in every way I knew how that I was an upstanding man of high moral fiber who really deserved to sleep in his yard. He was fine with it and I went on my way and didn’t return until that night.

The first night went smoothly and the next day a couple guys asked me if I had found a cooler place to sleep, as they too were trying to figure out where they could crash. The same older guy said that he was sure they could crash in the yard as well. That night there were 3 people in the yard. Me in the back of my Tahoe, 1 guy in a tent, and one guy in his van…with his dog. Van guy also happened to smoke cigarettes. This was where I realized this was probably going to turn into something. 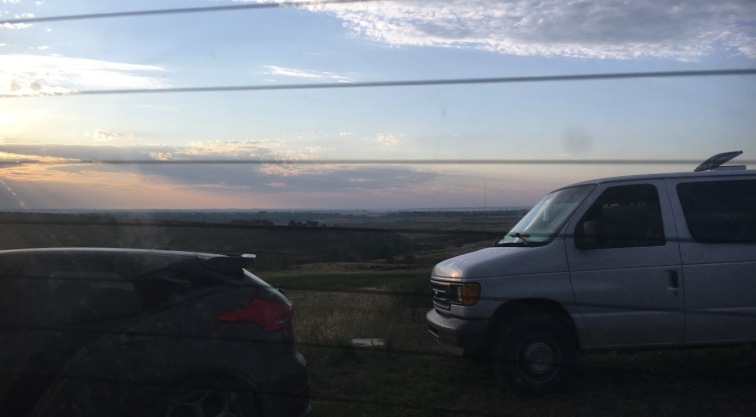 The view the first morning. This is where the car people slept. Tent(s) were pitched 50 yards to the left.

The next night, our ranks had grown to 5 of us, and a couple guys had realized that since the wind blew away from the house, they could smoke weed in the yard. So now there were 5 outdoor professionals, a dog running around, a few joints, and a case of beer in the yard. The wind carried it all away but I have to assume this guy looked out his window at some point to see what was happening.

By the last night of the course, there were 11 of us. There were 4 vans, my Tahoe, 2 pickup trucks, 4 tents, and a dog. Someone had brought a speaker and was playing the Grateful Dead, and I shit you not, the guy’s daughter was hanging out with us. That last morning, I left a note on the front door thanking him for the hospitality and signed it “The fellas in the yard”. I don’t think there’s really a moral to this, but if a bearded dude with long hair ever asks to sleep in my yard, I’m telling him get lost.

If you give a hippie a field…