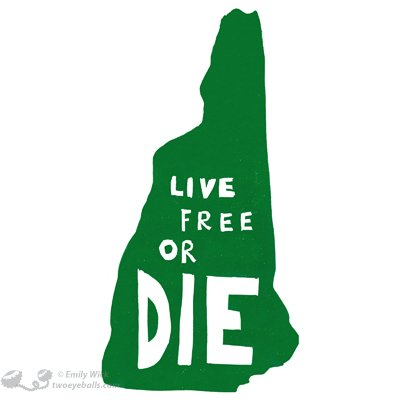 This isn’t necessarily a politics website. I want to start off by saying that. Will I talk about politics a lot? Yeah, because it is our best reality TV show and every 4 years we get the political Olympics with the presidential election. We’ve had George W. Bush, we’ve had Palin (who I miss dearly. We got a little taste of her again about a month ago and it was perfect), we’ve had Mitt Romney with his scary million-mile stare, and now we have the least hip person ever in Hillary Clinton, Larry David’s stunt-double Bernie Sanders, Creepy Cruz, and the current heavyweight champion of the world, Donald Trump. Maybe it’s because I’m more invested in this election than I have been in previous ones, but this has just been a spectacular process so far.

So, without further adieu, here it is. This is…

Today’s a big day. It’s New Hampshire Tuesday. The ol’ Concord proving ground. All the nation’s political eyes are nestled on this fine bastion of New England where guns rule and taxes drool. Nothing else matters today, not even the fact that Michigan lawmakers passed a bill last night that makes sodomy illegal, which was a veiled attack at homosexuality. “Why deal with a poisoned water source that’s literally killing our constituents when you can take a swing at the LGBT community instead?!”, one of those lawmakers probably said. But back to the White House Race.

The Iowa Caucus recently said there was something funky going on with the counting on the democratic side and that Bernie might have “[potentially kinda maybe won but please don’t talk about that]” but after a huge week in the spotlight (Great SNL appearances), he’s ready to move onto New Hampshire where he is beating Hillary by double digits and every person under the age of 30 is feelin’ that Bern (or they’re just coughing from the most recent bong hit). As far as today goes, Bernie’s a lock. Put money on it. It’ll recoup all the money you lost on Super Bowl Sunday (which is a very sore topic for me right now).

But now to the Main Event. The wild west that is the GOP race. In the most recent debate, Rubio got his dick kicked in by Chris Christie, Ted Cruz is still Dr. Strangelove, Trump went unscathed, and Jeb was still getting bullied. Not the most eventful debate so far, but we can’t appreciate the sunshine without the rain. Which brings us to some sunshine…

DONALD TRUMP CALLED TED CRUZ A PUSSY!!! Laugh out loud funny. Here is the link. Open up a new tab (don’t you dare close this out, I’m not done talking yet) and watch this.

Unreal. “I don’t want to hear you say that…but this is what she said” is so perfect it almost seems staged. To be honest, after his speech in Iowa where he congratulated everyone after he lost, I thought we’d see a different side of Trump. Maybe a little less brash or maybe more policy and less name-calling. I was wrong. He knows what got him here and he’s gonna dance with what brought him to the dance. A wonderful competitor. If he ends up losing, I want him to have his own news segment every day on Fox where he makes fun of everyone (including the Fox news staff).

In regards to the bottom half of the republican ticket, you have to imagine that if people like John Kasich lay an egg tonight, they’ll be ending their campaigns tomorrow. Maybe they hold on long enough to get into the VP conversation, but if you’re getting below 10% tonight, you’re most likely not gonna be smoking stogies in the oval office come January.

Polls are open in New Hampshire so here’s to a lively night on the Heroin Highway.

P.S.- I know I’m not the only one commenting on this today, but Donald Trump was apparently at a steak house in New Hampshire last night and ordered a rib eye well done. Someone asked him how he would like his steak and he answered “well done”. That is deplorable. If you’re paying top dollar for a steak, they better take that badboy off the grill when it stops mooing. End of rant.